← more from
ESP-Disk'
Get fresh music recommendations delivered to your inbox every Friday. 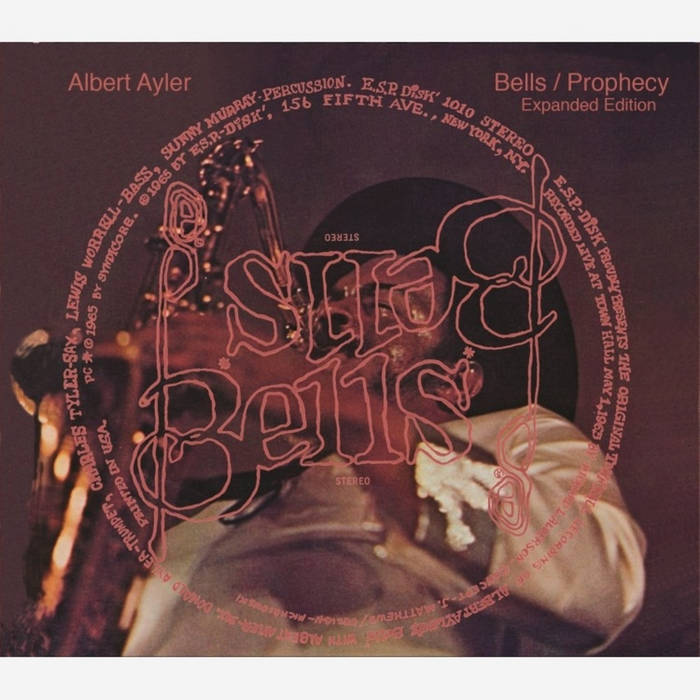 Albert Ayler's trio with Gary Peacock and Sonny Murray is best known for the July 10, 1964 recording of Spiritual Unity, the album that made both Albert and ESP-Disk' famous when it was released. A decade after that, ESP-Disk' also released, as Prophecy (ESP3030), the first documentation of the group, as recorded a month earlier by Canadian poet Paul Haines at a concert at a 91st Street club. These Cellar Café recordings are augmented here beyond the five cuts on the original Prophecy by including another six tracks from the same gig. (We use the more accurate titles found in their release in the Holy Ghost box set on Revenant rather than the fanciful titles on their first issue, as Albert Smiles with Sunny on the German label In Respect. Note also that "Wizard" on CD 1 and "The Wizard" on CD 2 are different compositions.)
1965 yielded Ayler treasures as well as his style shifted. The transitional Bells was just under 20 minutes, released originally as one side of a clear vinyl LP with the other side empty of music. It was recorded at a May 1 Town Hall concert of ESP artists, displaying Ayler's new group. Murray remained, Albert's brother Donald joined on trumpet, and Lewis Worrell held down the bass slot. The denser sound of "Bells" shows Ayler moving towards the bigger sonic statement made on Spirits Rejoice, his September 23, 1965 Judson Hall session. By the way, "Bells" as heard here is not, in fact, a single composition; rather, it is a medley moving from "Holy Ghost" to an unnamed theme and then into "Bells" proper. Bernard was so excited by "Bells" that it was released on one side of an LP without delaying to record additional music to fill the other side. "Bells" also happens to be the recorded debut of saxophonist Charles Tyler, who would go on to record for ESP as a leader (ESP1029, Charles Tyler Ensemble, and ESP1059, Eastern Man Alone).

Tenor saxophonist Albert Ayler, one of the most controversial and polarizing musicians in the history of jazz, pioneered a new style of playing and became an icon of "free jazz." The playing of both Ayler and his band mates was of such great spontaneity and imagination that no two performances are remotely the same beyond their themes -- and their emotional intensity. ... more

Bandcamp Daily  your guide to the world of Bandcamp